Let me just begin by stating that the SOG PowerAssist may well be the most sophisticated multitool ever made. High tech features abound. Every aspect of this tool is an evolutionary step up from the SOG’s that came before. No portion of the tool can be described as “ordinary.”

On top of that, the PowerAssist is an exceptionally high quality tool. Every individual component is perfectly formed, then given a bright high luster polish. Function is butter smooth without a slightest hint of a flaw. This is clearly the flagship of the SOG multitool line. 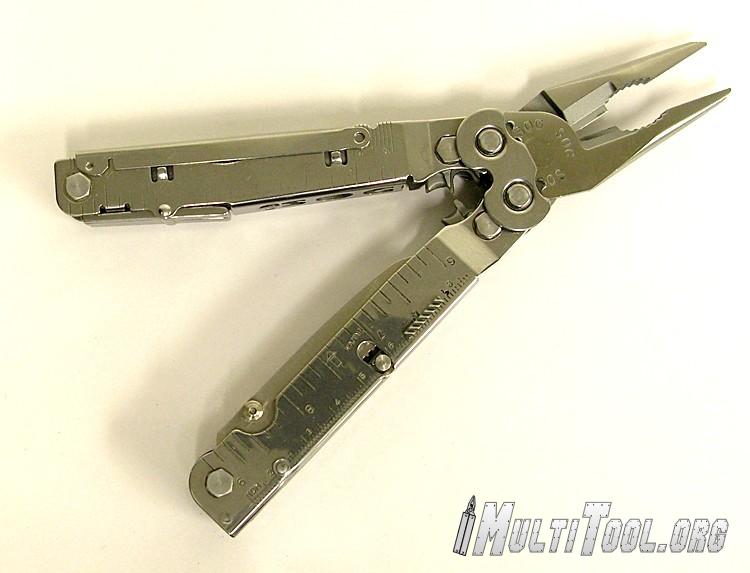 A brief tour of the various functions:

Pliers:
The PowerAssist sports the new and improved “2.0” plier head design. The needlenose tips are needlenosier than original PowerLocks, and the wire cutter section is a whopping 3/8” (10mm) in length. Along with the Paladin series (made in collaboration with SOG) these are the only multitools I am aware of that can slice through regular three-wire household romex wire in a single snip. 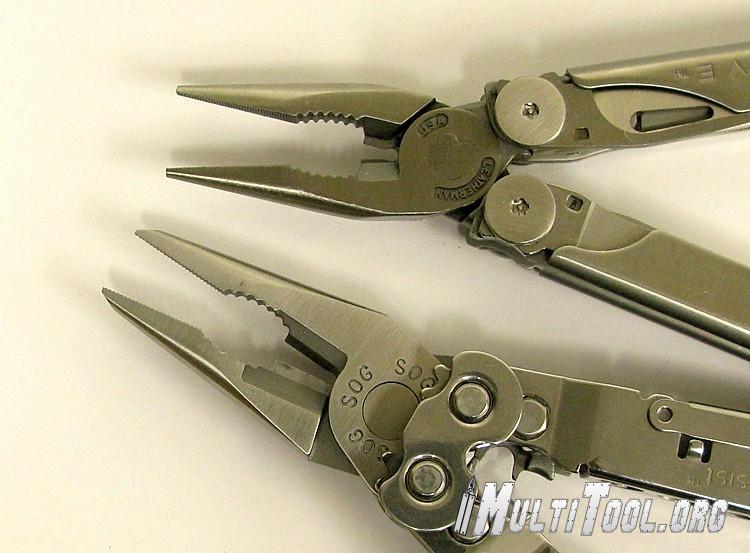 Compound leverage has become a signature of SOG multitools, and the PowerAssist is no exception. An interlocking gear drive at the end of the handles gives the user almost a two-to-one compound advantage when gripping something with the pliers, or cutting heavy wire.

Speaking of those interlocking gears, another 2.0 feature well worth mentioning is the new gear covers. Their purpose is protection; protection for the palm of your hand when using the screwdrivers, and protection for the bottom of your pocket when carrying the tool without a sheath. 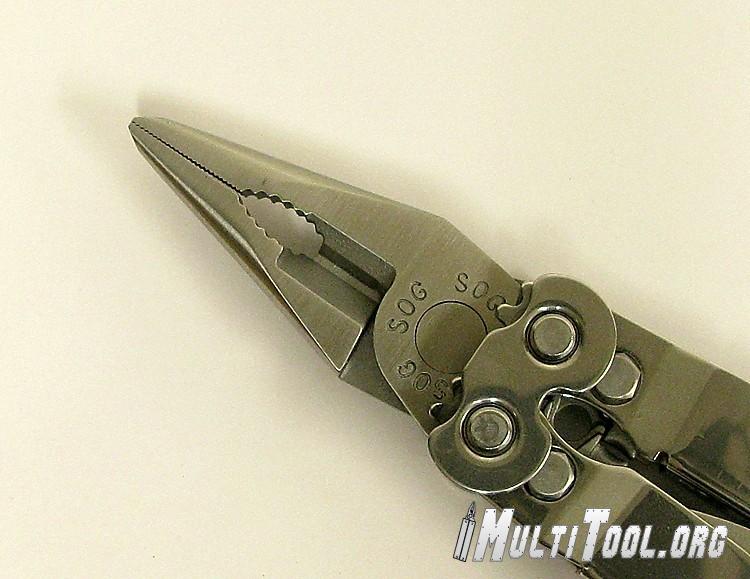 covers for the compound leverage gears are worthwhile protection

Knives:
The PowerAssist gets its name from the SOG Assisted Opening Technology used on its twin knife blades. Whether you think a multitool needs quick-deploying blades or not, you’ve got to admit this is a cool feature. Coupled with the fact that this is the first model from SOG where you can access the blades without opening up the pliers makes it a winner in my book. 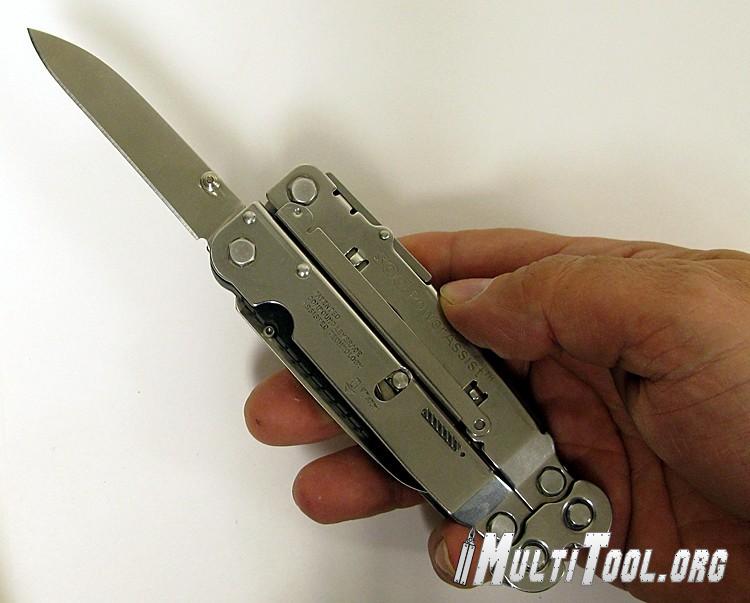 the knife blades in one handle are spring power assisted opening....

So how does it work? In short, the deployment works very well, but folding the knife back up takes a bit of getting used to. To deploy, simply slide the safety switch into the unlock position, then start pushing up on the thumb stud. After a very short distance the assisted opening takes over and FLICK!, in the wink of an eye the blade is fully deployed and locked open. Wow, ready to go!

....but the spring box takes up space where other tools and blades would go.

Refolding requires some nimble hand/eye/thumb/finger coordination. (either that or simply use two hands) First the unlock button needs to be actuated with your thumb, then your forefinger needs to close the blade, then your thumb again to slide the safety switch back into position. It really isn’t so bad once you’ve done it a few times.

And as a matter of fact, you’d best practice doing it left handed, because the serrated blade mechanism on the left side is an exact mirror image of the plain edge blade on the right. That’s correct, BOTH blades on the PowerAssist are assisted openers.

Other blades/tools:
My S66 model came with a file blade, a combo medium flathead screwdriver/cap lifter, a large flathead/prybar, a #1 phillips screwdriver, a combo small flathead screwdriver/can opener, and SOG’s patented V-cutter. Not a bad compliment of tools really, although I must admit to missing the scissors. All of these tools are standard SOG fare, found on many other models, so I won’t go into detail on them here. 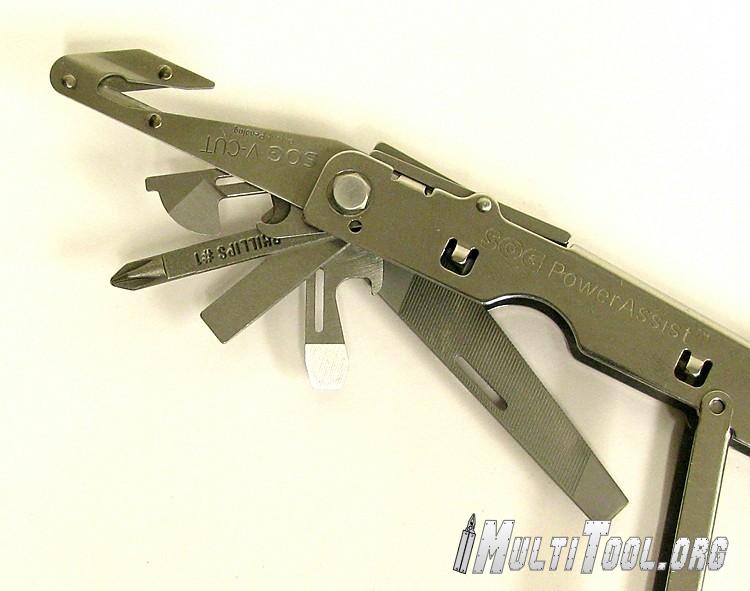 Piano Locks:
The whole idea here is to prevent blade clumping. Original SOG PowerLock models had a single lever which locked the blades and tools in the open position. The new piano locks work on the same principal, providing a good secure lock, with the additional benefit of applying individual tension to each tool. This helps prevent the entire clump of tools from unfolding when the user only wants one of them.

That being said, some folks actually prefer a clump of tools, and some don’t. To each his own. 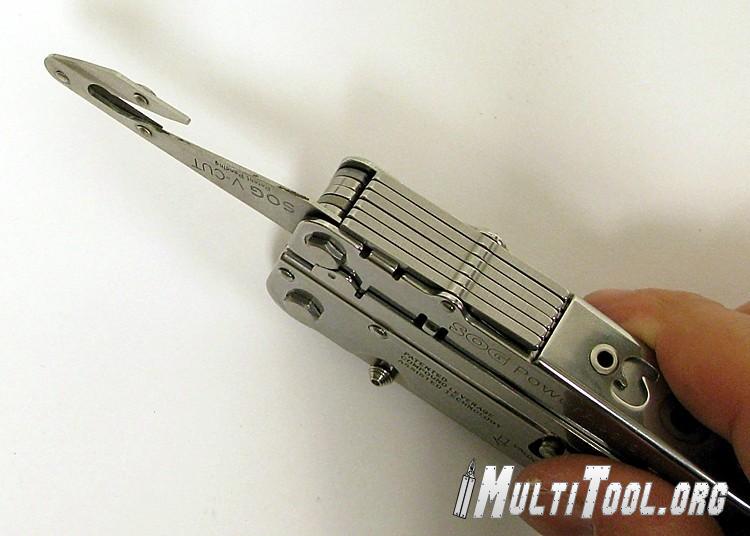 Handle flap:
I’m not a fan, but this flap is better than those on other SOG’s. It is crisply formed, less rounded, and “fits” to the plier handle better than its predecessors. In addition, there are detent bumps out near the end, which cause the flap to snap into place when closed. And lastly, there are little “stops” formed from the handle, which better locates the flap and prevents it from deforming when using the pliers under heavy pressure. 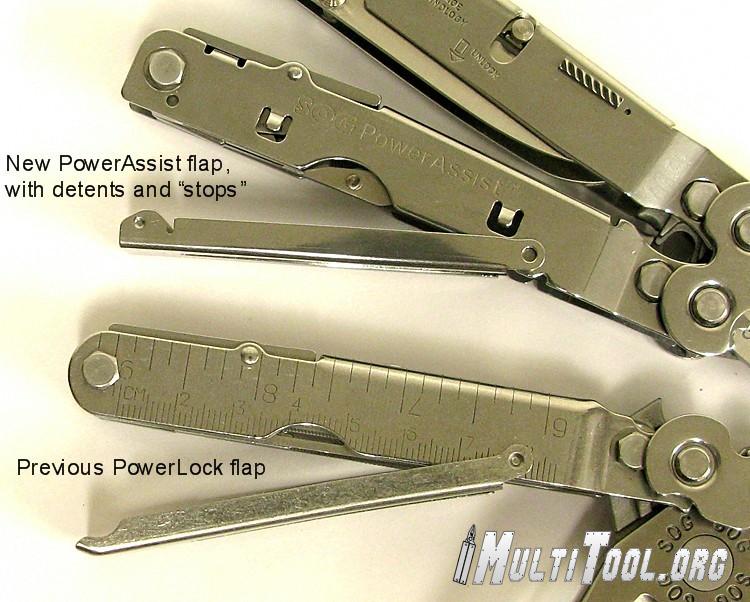 the handle flap protects your palm when squeezing hard on the pliers. It is better made than previous SOG handle flaps. A better solution? Make blades and tools on BOTH handles outside-opening, and do away with the flappers altogether.

Impressions:
So those are the details folks. A mighty fine multitool, quality built, and loaded with features. But is the PowerAssist right for you? It depends on the individual. Ask yourself these questions:

Are two assisted opening knife blades worth trading away the other three tools that would have fit in that handle?

Pliers, knife, screwdrivers, other tools. Which do you use most often? Record fast knife blade deployment is fine, but the rest of the tools in the other handle surely set the record for slowness.

Are assisted opening blades even legal in your area?

More in this category: « SOG Powerlock 2.0 Review SOG PowerLock EOD BO Review »
back to top
Interested in this or a different tool and still have more questions?
Why not join us over on the Multitool.org Forum where our community can help you find what you're looking for!