I awaited rather impatiently the arrival of several Super Tool 300s that I had ordered before they came out. As luck would have it, I finally got them, and it is time to write a small review about my thoughts and ideas about Leatherman’s newest addition to the multi-tool family.

The Super Tool 300 is 3rd in a family of large heavy multi-tools. You can see its lineage in the older models. The first Super Tool came out in 1994 and was discontinued in 2001. That was quickly followed by the Super Tool 200 which had a run from 2001 to 2005. At this point, Leatherman produced the Core which was introduced in 2005 and is still being produced although there are talks that it may be discontinued soon, but who knows other then Leatherman. The Super Tool 300 is a 2009 model that had a September roll out.

To better understand the Super Tool 300, you have to examine its predecessors. The whole family is geared towards Industrial/Construction trades, where a larger and tougher tool is in high demand. Special mention should go out to another large multi-tool, the Surge, which will not be talked about in this short review as it belongs to another Leatherman family and doesn’t quite fit into the lineage of the Super Tool 300.

One could almost argue that the Core does not belong in this group, as it came out along with the Kick, Fuse, and Blast, which belong to another branch of the family. These all contain Zytel liners. However, the Core shares quite a bit with the Super Tool 300 as you shall see, and is deserving of its place in this review. 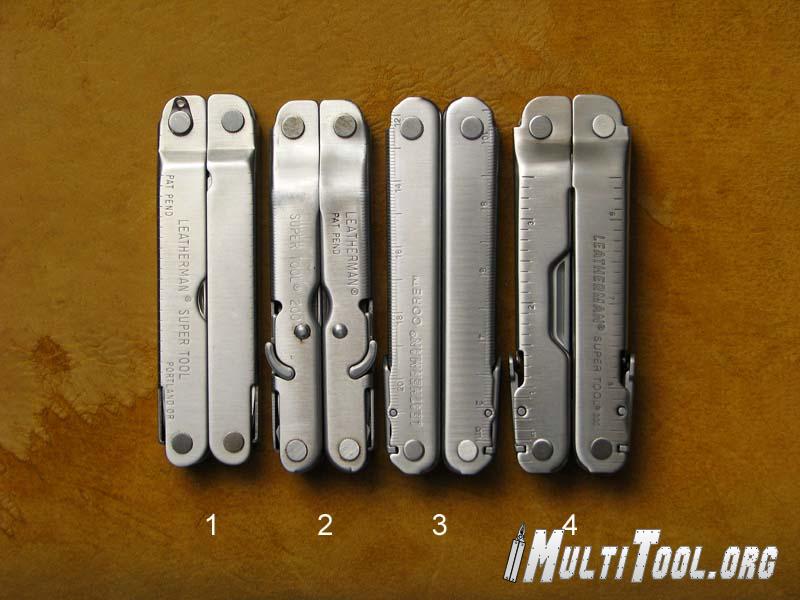 The thickness of each tool is of interest, and you can see that the Super tool 300 gets its shape from its predecessors. The Core stands out due to its boxy profile. 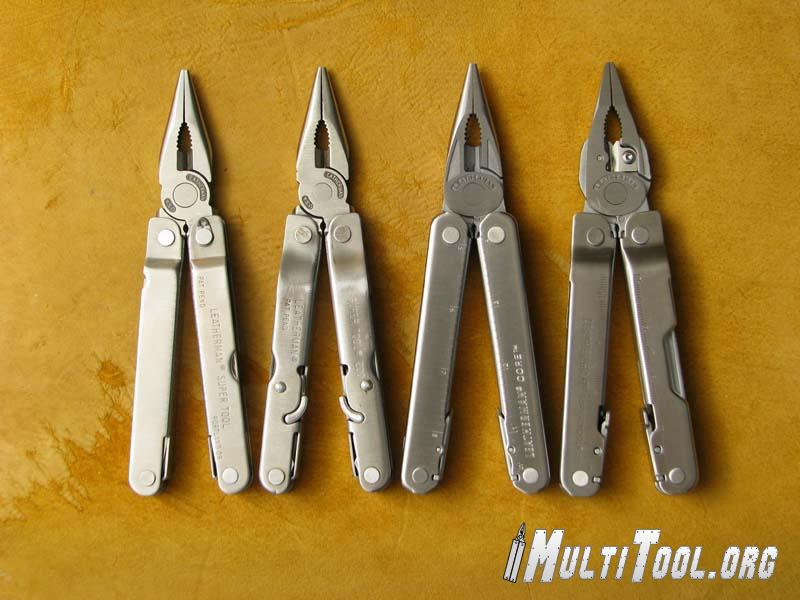 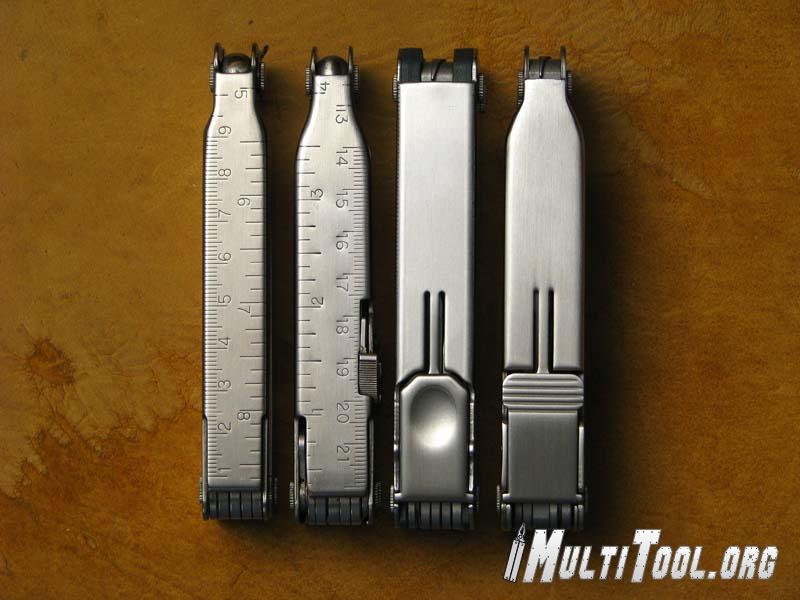 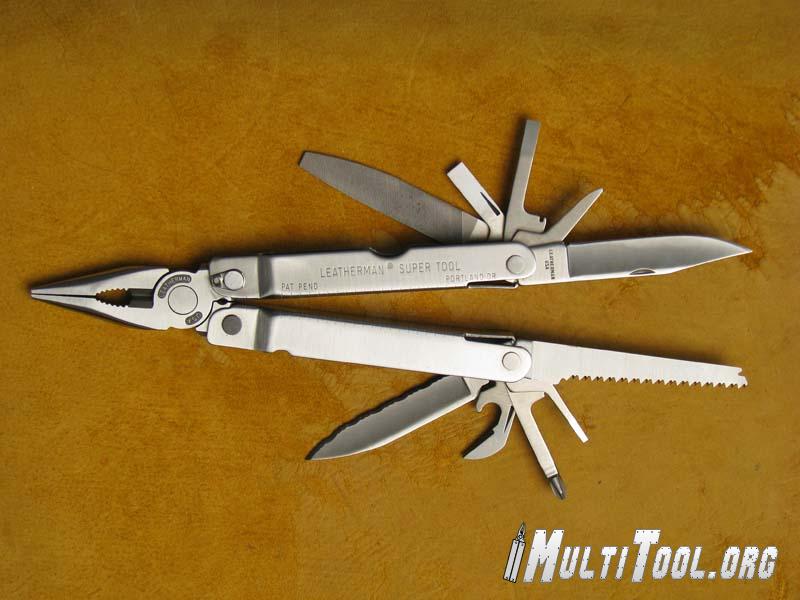 The original Super Tool was a ground breaking product for Leatherman. It had a locking tool feature which showed its age today. You basically had to move another tool 90 degrees to the locked tool to unlock it. It was rudimentary but it did work rather well. The back of the folding tools have a very deep notch and it was fairly impossible to unlock a tool by mistake. Solid locking tools are a must for its demographic market segment. 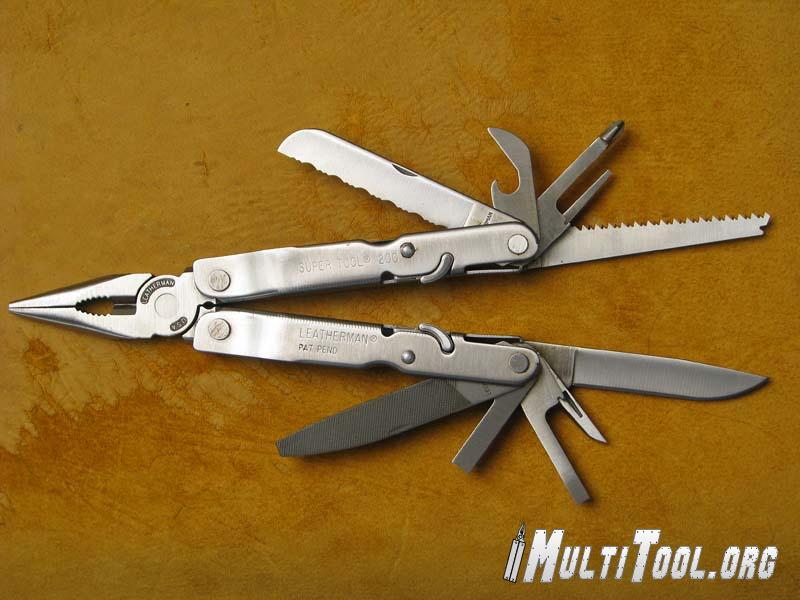 The update to the Super Tool. The big difference here is the locking mechanism which it shares with the Pulse. This mechanism tends to foster a love hate relationship amongst its users. Whatever can be said about them, they were an improvement over the crude locking mechanism of the original Super Tool. The other big introduction was the inclusion of a serrated sheepsfoot blade as opposed to the serrated clip point. The Sheepsfoot would excel at giving you a clean cut on flat surfaces. 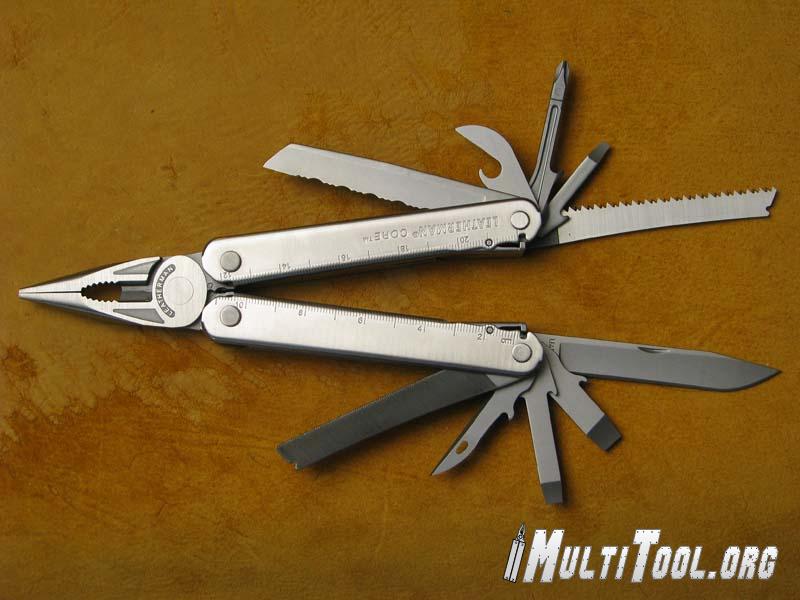 The Core came out when the Super Tool 200 was discontinued. It shares many traits with the smaller Kick, Fuse, and Blast models, that being the nylon liner. The Core is also built a bit lighter and isn’t meant to take the abuse that the other Super Tools are meant to. Consequently, I have heard several reports of the locking mechanism failing. The nylon insert (Zytel) is used to stiffen the tool, as it is made from a very light sheet metal. I include this tool only in that it shares the exact same tool set as the newer Super Tool 300. 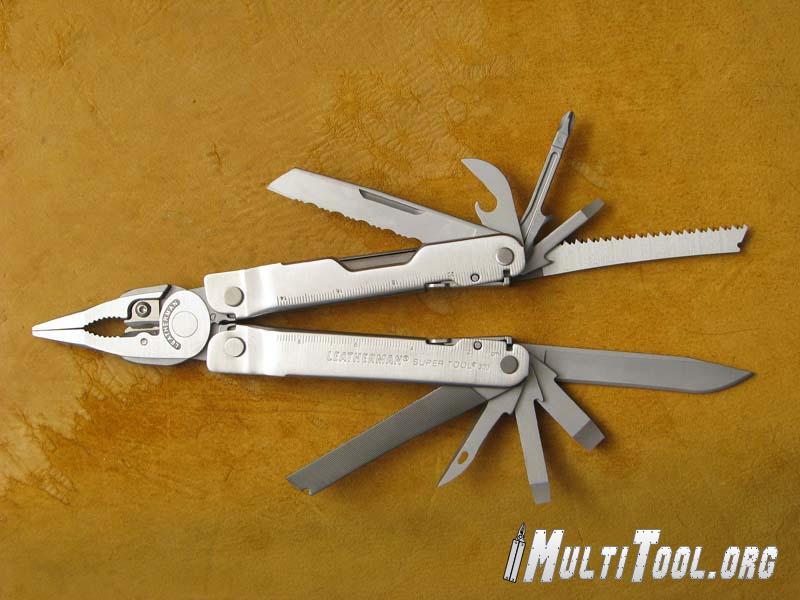 The 300 continues the line that was discontinued back in 2005. The Core was not exactly a sturdy replacement. Leatherman saw a need to bring back the Super Tool family. It eliminates the Zytel liner and thinner sheet metal in its construction that was the hallmark of the Core, and brought back thicker metal along with the traditional Super Tool profile. On top of this, they included removable cutters, and improved the tools usage with gloves by means of larger handle cutouts, hinting strongly at what this tool is designed to accommodate. The Super Tool 300 will be very popular with trades people and anyone who wants a very heavy duty multi-tool. 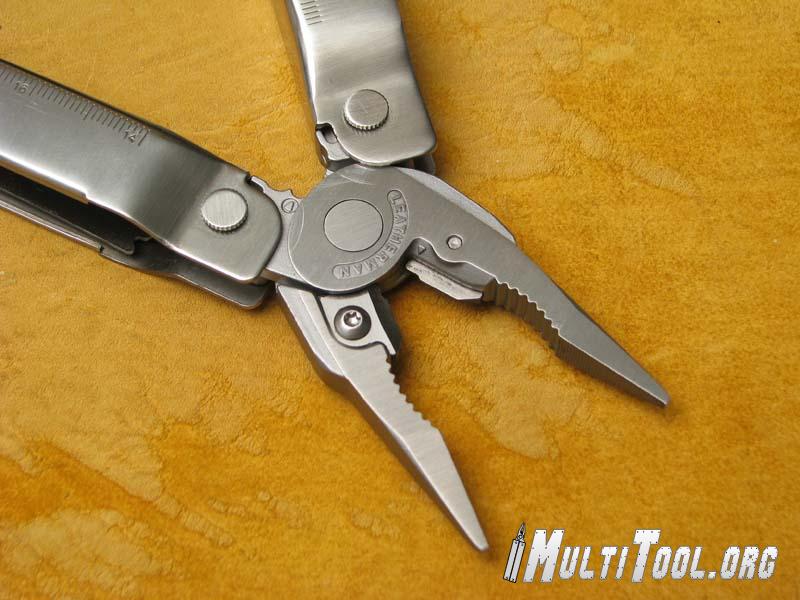 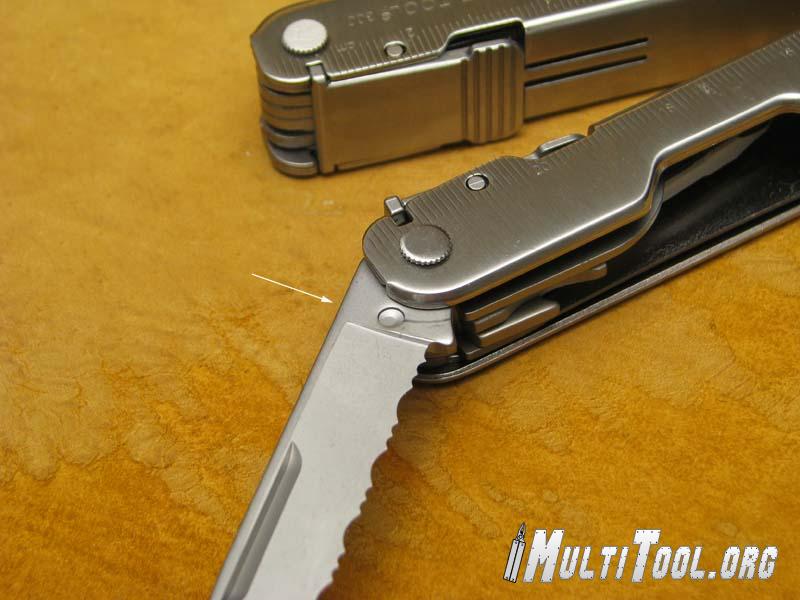 The arrow in the above photo points to a new feature of the new clumping system. The main blades are designed to be deployed alone with the aid of this indentation which mates to a protrusion in the handle. The secondary tools are designed to clump together to make it easier to get the tool that you want. Many people dislike clumping, and others love it. Tool clumping does aids in tool selection and deployment. 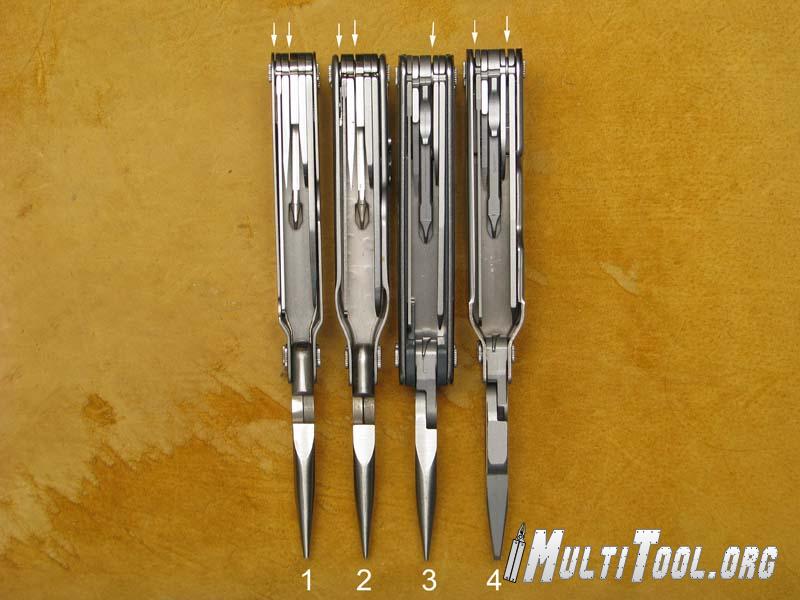 The arrows point to the spacers found on one side of these Leatherman multi-tools. Note the difference in the spacer locations in the 300 compared to the Core which has the same tool load out. 1-Super Tool, 2-Super Tool 200, 3-Core, 4-Super Tool 300.

Now, I like the Super Tool 300, but I do have several of them to compare to each other, and I have found a few slightly disconcerting things. 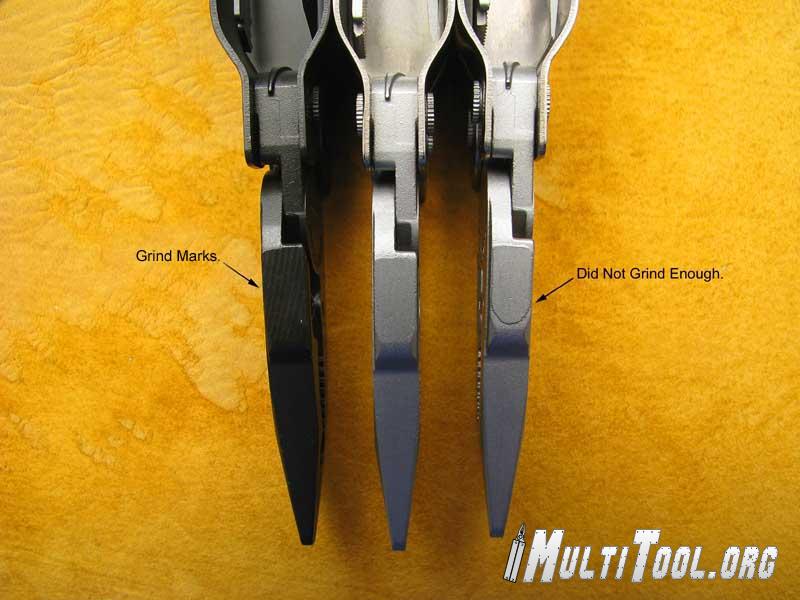 The above photo shows the plier head of the three 300s that I have in my possession. I noted a few inconsistencies that are minor and are mostly cosmetic in nature, but do indicate a quality control issue. The Black Oxide has grind marks on one side of the pliers. The 300 0n the right has a plateau where they didn’t grind enough off. Minor stuff, but if you have a few to compare, it quickly becomes evident.

Another issue that I have found that appears to have some commonality with several online user complaints… one of my 300s is super difficult to open and close. I know this will loosen up with time, however, not only are the main handles tough to open and close, but so are the tools inside of those handles. They are so stiff they fit the bill for the term “nail breakers”. Likewise, the same 300 has another issue with it that is even more disconcerting. The folding tools feel like there is sand around the pivot point. It isn’t smooth at all, and feels rough. The other two are much better. In fact, I would say they are perfect. So what does this tell you? Well, you might get lucky and get a perfect tool, or you might get unlucky and get a very bad tool. This leads me to the quality control thing again. I heard that the Skeletool was rough at first introduction. If that was the case, the 300s are much like that. With time, the QC will improve and eliminate the inconsistencies that abound with this tool right now at introduction. 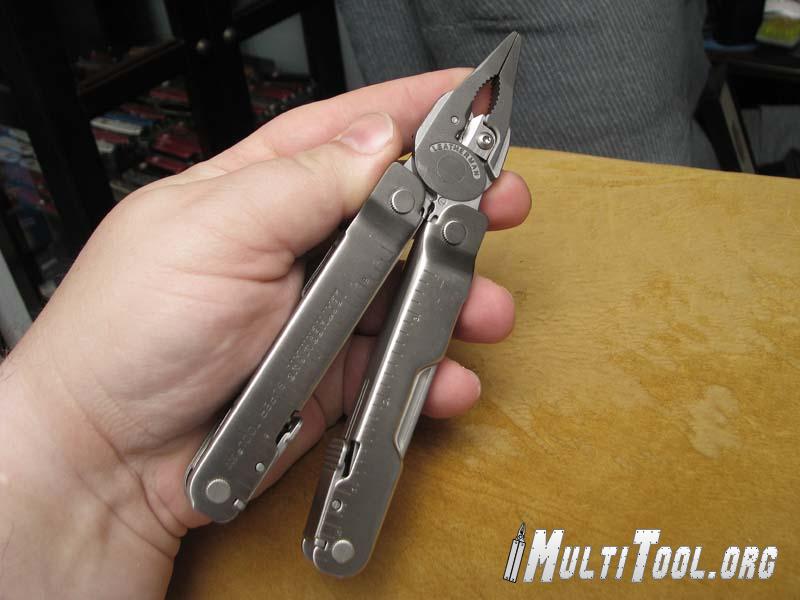 Even with the Quality control issues at the moment, the Super Tool 300 sure does impress. I very much like this tool. It gives the user great confidence that it will survive a tough job and then some. It has a great tool load out that made the Core such a powerhouse in the Industry with a few welcome additions such as the removable cutters. Now, the electricians will have some choice over the very popular Gerbers with the removable cutters.

Conclusion
I recommend the Super Tool 300 to anyone who needs a durable multi-tool. It does not exactly replace the Core. The Core is built lighter but is a very capable tool. Likewise, the Super Tool and Super Tool 200 are discontinued models albeit still very desirable multi-tools today. The Super Tool 300 does have some quality control issues. Much of it is cosmetic and won’t affect the tools function. In fact, most people won’t care about these, and will probably add a few of their own marks in no time. A bit more disconcerting is the stiffness in the one tool that appears to be common to a few others mentioned on the net. The stiff one came in a Blister Pack and the two better tools came in boxes. I would be interested in seeing if there are many stiff tools that are shipped in boxes, or is it due to the blister pack somehow? Is there even causality, I have no clue.

Pros:
- No plastic in the handles.
- Exact tool load out as the Core…and that is no bad thing.
- Removable cutters.
- Heavier construction then the Core.
- Clumping mechanism works as advertized (Some issues may be evident as per the Cons listed below).
- Can use the two main blades with gloves due to a larger handle cut out.
Cons:
- Some Quality control issues with the plier head castings.
- Some 300s are super stiff. This will probably loosen with time, but it doesn’t give you that quality product feel that you would expect from a Leatherman.
- Some 300s have issues with the clumping system. That indentation found on the main blades can be super stiff, negating any advantages you get with the larger finger cutouts in the handles.
- Locking mechanism that sticks out too much and has no rounded edges.

More in this category: « Leatherman Freestyle and Freestyle CX Review Leatherman Squirt PS4 Review »
back to top
Interested in this or a different tool and still have more questions?
Why not join us over on the Multitool.org Forum where our community can help you find what you're looking for!