An often-overlooked entry into the keychain size MT market is the SOG Crosscut. I was talked into buying one from ‘Sharper Image’ or some such mall shop many years ago, and as overpriced as it was, I would have paid it again. The original Crosscut was an absolutely excellent tool. It has been replaced by the Crosscut 2.0, with only a few refinements, and a fairly major drop in build quality since production switched from the United States to China. While it’s not what it used to be, it’s still an excellent option for keychain carry. 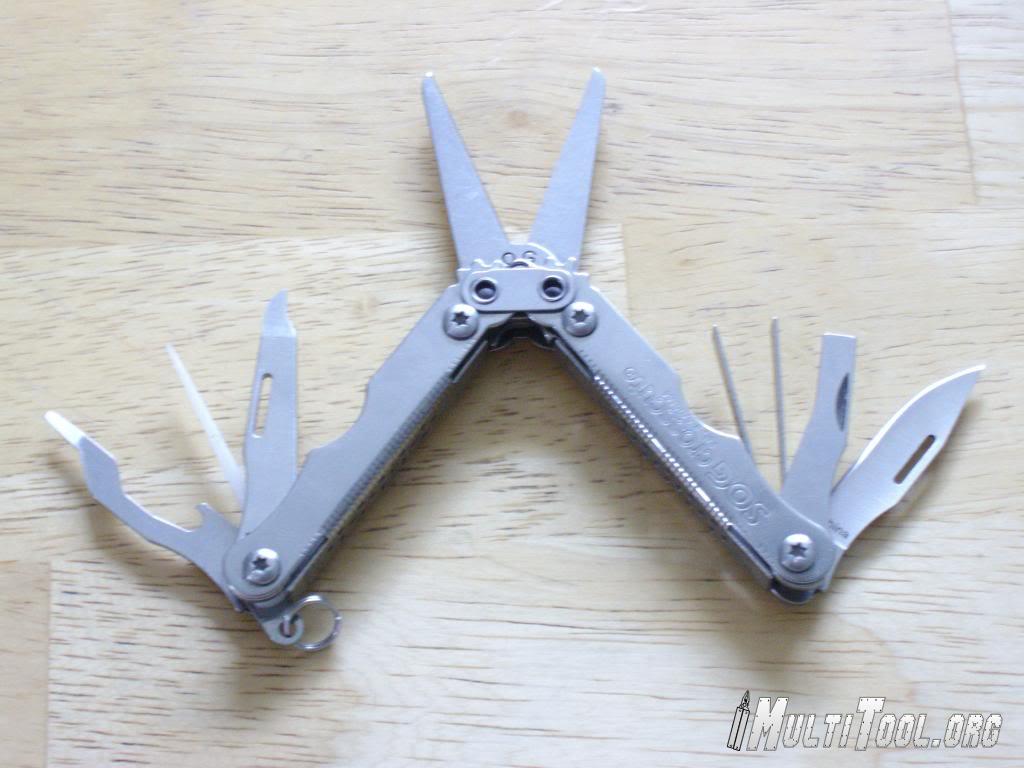 As of the writing of this article, the Crosscut can be found on Amazon for $14. This makes it about the least expensive name brand keychain MT out there. The tool is 2½” (63mm) long, excluding lanyard, a bit under a ½“ (12mm) thick, and about 7/8” (22mm) wide. It weighs 1.68oz (47.5g). The entire tool, minus the toothpick, is made of stainless steel. The toothpick is plastic. The fairly high level of polish on the tool, and stainless steel construction meant that my previous version withstood 15 years of daily carry like a champ. I expect the same from this one. The tool is held together with torx bit screws (maybe t9 or t8, I don’t have a bit small enough to fit it).

The tool is based around a pair of scissors that use the compound leverage system common to SOG’s larger plier-based tools to generate amazing amounts of cutting force, particularly at the tips. These scissors really shine when cutting heavy materials, and particularly in cutting zip ties when you can only reach them with the scissors’ tips.
Here is my review of their cutting ability compared to other multitools.
http://forum.multitool.org

The outside housing of the tool is also stamped with a ruler in both English and metric units. The split ring can be removed and the lanyard attachment swiveled into the body of the tool if one wished. The 2.0 version of the tool has detents in the blades that create a very solid resistance to the tool accidentally opening. This is a new feature from the original, which came with a simple plastic slip case. The housing has indentations on the handles that give a bit of grip purchase while using the scissors. When closed, the gear teeth of the lever action system protrude from the side away from the lanyard, and may be a bit annoying for pocket carry. I would recommend making a slip case for anyone who intended to pocket carry the tool.

All of the other tools are accessible only when the tool is opened. This is like the Leatherman Micra (it’s closest competitor) and unlike the newer tools like Leatherman Squirt line and the Gerber Dime. While it requires more steps to access the internal tools, it allows more long tools.

On one side, the tools are a combination small flathead driver/cap lifter, a toothpick, and nail file. The small flathead is one of the few on any multitool that will actually fit eyeglass screws without some work. The cap lifter is adequate, if somewhat finicky. The toothpick is stout, and on my previous model stood up to 15 years of use. As it’s built into the tool, it can’t be lost, unlike on Swiss Army Knives where the toothpicks seem to yearn for freedom. The nail file is the most aggressive I’ve seen on a small multitool, outside of the Leatherman Squirt PS4.

On the other side of the tool is a blade, tweezers, and flathead driver. The blade, like all of Leatherman’s keychain offerings, is chisel ground. It comes very sharp, and is quite capable of most day-to-day small tasks, like opening mail or boxes. Like the Micra, it suffers from being an inside folding blade, which puts the hands in the way while trying to cut with it, but unlike the Micra, you can’t use a tool-half-open method, because of the compound leverage scissors. I’ve found this to be a minor annoyance at most in my experience with the tool. The tweezers are broad with fairly good matchup of gripping surfaces. My original one had perfect match-up. The flathead driver has excellent reach and is very sturdy, on par with the Leatherman Micra. While it does not lock into place, its design tends to push it to the open position under pressure. The flathead also acts as an excellent light-duty pry tool. It can pry light staples from paper, heavy staples from cardboard boxes, or get open pesky pop-top can pull-rings, and offers a great option to save blades from having their tips snapped off.

I carried one of these tools for 15 years. The current model loses some in build quality, but that comes at only slight diminished function (mostly with the tweezers). If money is not an option, I would recommend the Leatherman Micra over this, but for more budget-conscious, the Crosscut is still an excellent option.

More in this category: « SOG PowerPlier Review SOG Reactor Review »
back to top
Interested in this or a different tool and still have more questions?
Why not join us over on the Multitool.org Forum where our community can help you find what you're looking for!