This is a tiny, tiny little one piece tool that nonetheless manages to pack a ton of functionality in. 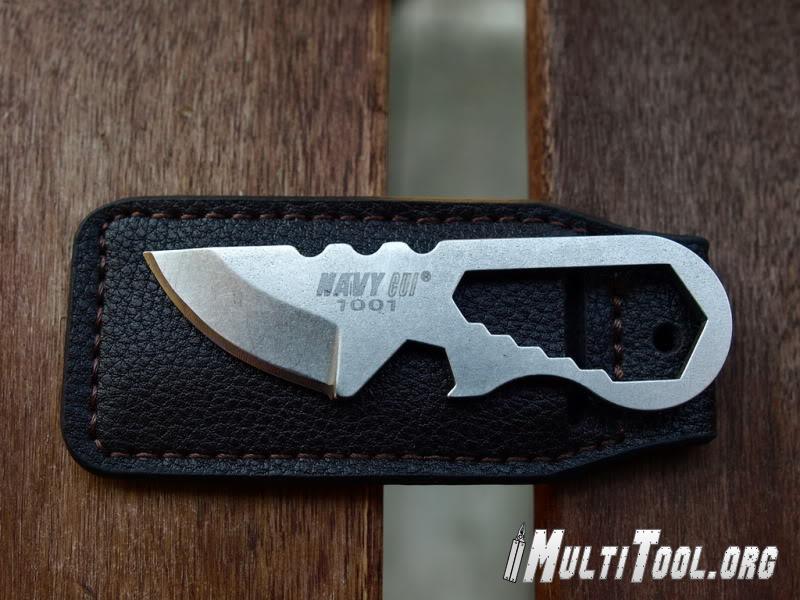 Before I get any further in the review though, let's just get this out of the way - yes, it looks to be "inspired" by the Atwood Fixer. Same size and same basic functionality, but different materials, size, blade shape and tool loadout. Whether or not this bothers you is entirely up to you. There are enough changes (including some rather clever engineering ideas) that I think this tool really does stand up on it's own merits and shouldn't just be dismissed as "just another Chinese copy".

Alright, let's get to some specifications:

Steel: 440C or 8Cr13MoV (not entirely clear on this as I've seen both presented on various places)

The specifications as to steel are a little bit murky, unfortunately. The site I bought the tool from has stated the tool is made in 440C, but I've seen a few other sellers list it as 8Cr13MoV. I would be inclined to believe the latter. I'm quite happy with the steel choice, as I think the legions of CRKT, Spyderco, Kershaw, SRM and other knives have proven that 8Cr13MoV is quite a capable formulation.

First of all, wow, this thing is tiny, and I mean tiny. I have small hands to begin with, and even I have a problem getting a two-finger grip on the tool when using the knife. For a comparison, here's a picture of the K1001 in comparison with a well-known keychain knife from Spyderco, the Ladybug. 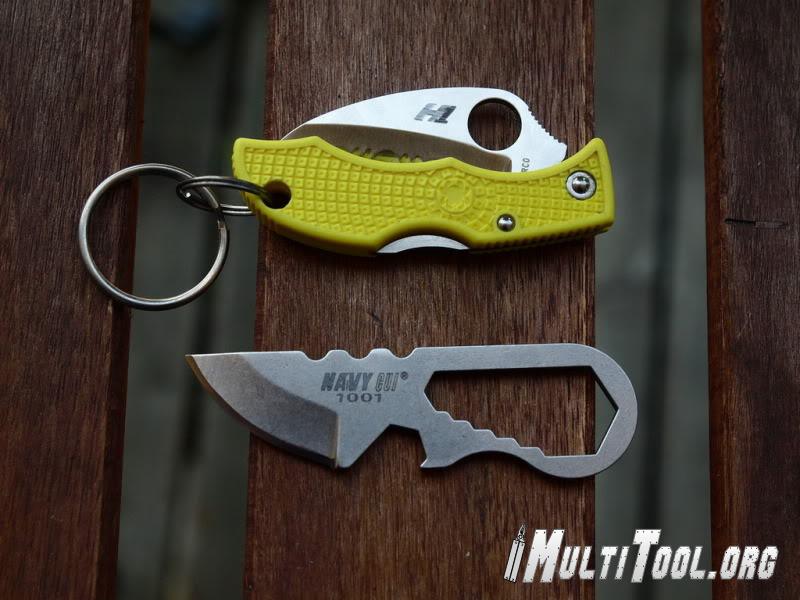 As you can see, the entire tool nearly fits in to the handle of the Ladybug.

The thing is, I don't mind this at all. The 1001 is meant to be a keychain-type last resort tool, something for quick fixes, opening beer bottles or doing things like opening packaging or cutting packing straps. You don't need a ton of size for that, but you do need to understand the limitations.

On the plus side, when using the wrenches and the bit driver there's enough purchase to comfortably get three fingers on the tool (as long as you're careful with the blade placement) which is plenty for the wrenches.

As for the wrenches, there are 6 sizes of metric wrenches in the handle, plus the bottle opener doubles as a seventh wrench. The smallest wrench (6mm) can also work as a 1/4" bit driver, with a very, very small amount of play. You won't get a ton of torque because the driver cutout is in the middle of the tool but again, for quick fixes it works quite nicely. The major downside is of course that blade in the way of the using wrenches - if the tool came with a kydex sheath, it would be a non issue, but since it comes with a leather sheath (a pretty good one at that) you have to be a little careful about how you go about using it.

Another interesting thing is that there are horizontal groves machined in to the tool on all the surface edges -outside, as well as in the box wrench section (had a tough time getting pictures of these). I originally though they were left over machining marks, but they're far too deliberate for that to be the case. My guess is that they exist to increase friction and grip in hand and on nuts. They also correspond perfectly to a MM scale, meaning the back edge of the knife can be used a millimetre rule in a pinch.

And of course, the bottle opener. It works. I'll leave it at that.

Fit and finish of the tool is actually very good. Surprisingly so, in fact. The entire tool has a very nice stonewashed finish that is quite attractive. I believe the stonewashed finish is actually on this particular piece to hide the tooling marks on the blade and wrenches, as there are still a few very light grind marks on the tip of the blade, but it looks quite good nonetheless. 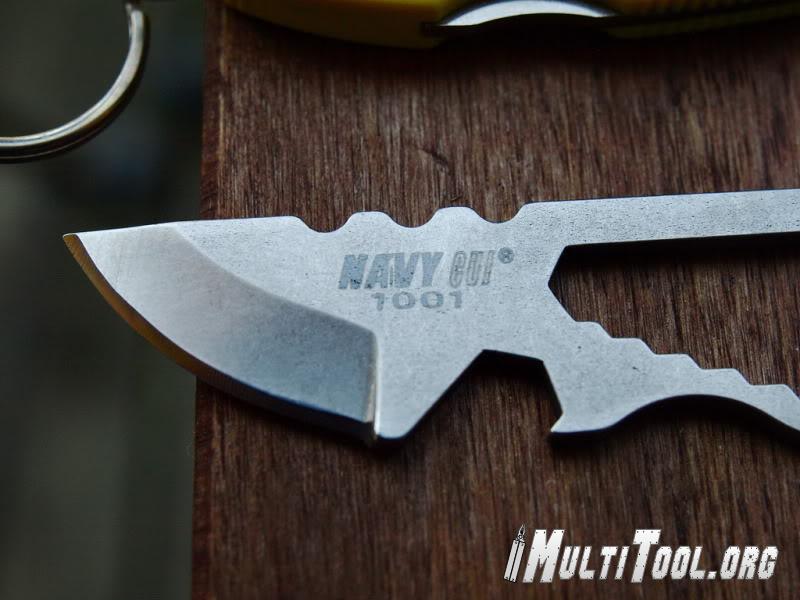 You can see some very, very light tool marks at the tip of the blade underneath the stonewashed finish in the picture here.

The wrenches are generally well cut with straight edges and little slop, and the entire tool has been polished to remove the truly sharp corners on the handles. The sheath included is actually quite nice, being a stitched leather affair, though I would've preferred a kydex or thermoplastic sheath so I could keep the sheath on and use the wrenches a little more safely. 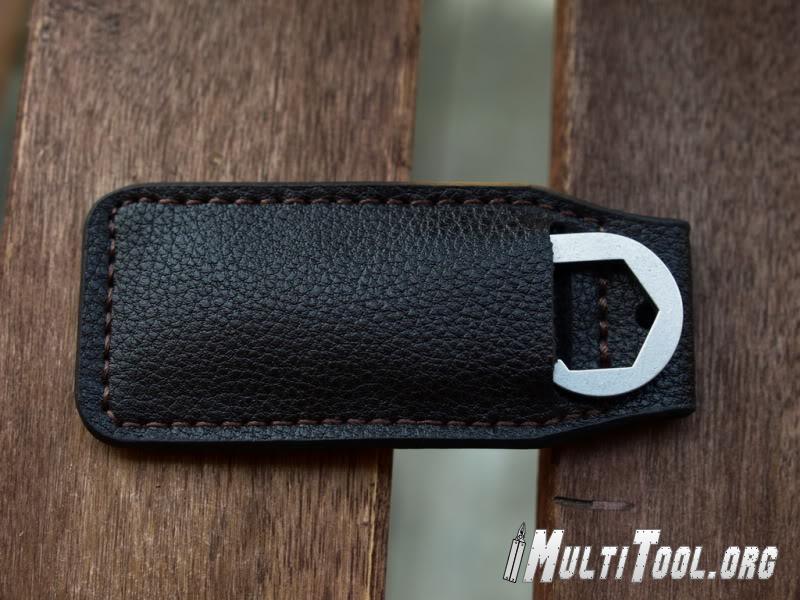 The sheath does hold quite securely, and there is both a keychain hole and loop for carrying on a lanyard or neck chain. And as I said - it's actually quite nice a sheath as well. Even though it's single stitched, the leather is thick, evenly tanned and the edges are properly burnished and polished.

For the price I paid for this tool, the sheath alone is worth it. Seriously. As an aside, it makes a perfect keychain sheath for a Vic Classic, Wenger Esquire or Micra. It's just too bad that the tool really needed a kydex sheath instead.

The blade was well machined, with even grind lines and it came hair-shaving sharp out of the package. Very impressive on that end as well.

Well, I spent the weekend with this little tool, helping my father with his housework. Between taking apart his lawnmower and weed whacker, as well as taking apart all the garden trellises the 1001 actually saw quite a bit of work.

Let's start with the bad - yeah, you need to be careful when using the wrenches. To get maximum torque you'll often end up pressing the blade directly in to your palm, and this can lead to a pretty nasty cut if you're not careful. To get around this limitation, I ended up making a small "slip cover" out of some scrap leather I had laying around, and putting it on the blade when I really wanted to bear down on the wrench cutouts. This worked quite well, though in the future I'll probably look in to having a kydex sheath made (though this will probably cost more than the tool did in the first place).

The good? The wrenches themselves worked very well. There's very little slop or play in the wrench cutouts, and the horizontal grooving really does provide excellent traction on bolts heads and nuts. The finger groove at the bottom of the wrench section helps with grip, as does the jimping on the top of the blade.

Despite being very small, the stonewashed handle also provided good enough traction for doing things like cutting trimmer line and garden twin when using the blade. After three straight days of usage, the blade was no longer hair shaving sharp, but it was still sharp enough for me to consider it safe to use - I didn't need to put any abnormal force in to cutting that would have lead to slippage and unsafe circumstances.

As good as the tool is, as nice as the sheath is, if the Navy K1001 came with a fitted kydex sheath instead of a leather sheath I'd rate it as a must buy. Right now, I think the tool is well made and highly functional but comes with a big caveat - watch out when using the wrenches!

I do like the tool enough though that I will probably make or find a proper fitted kydex sheath for it though, and the existing rather nice leather sheath will probably find a home with my Micra.

More in this category: « Superior Titanium Shark One Piece Tool Review TT PocketTools Chopper Review »
back to top
Interested in this or a different tool and still have more questions?
Why not join us over on the Multitool.org Forum where our community can help you find what you're looking for!