Schrade has always been a mainstay in quality American manufactured tools- a reputation well deserved with the tens of thousands of slip jointed knives produced over the years.

The Schrade ST1 is a must for any collector

The Tough Tool ST1 is no exception. Schrade designed the ST1 to address some of the problems associated with early multitools, such as painful sheet metal edges that dug into your hands, non-locking tools and the limited number of tools available inside the handles. They accomplished these goals in uniquely Schrade like ways.
Firstly, to address the terribly uncomfortable sheet metal handles that dug into the user's palm and fingers, they simply turned the handles sideways so that the tools cam out from the side and the edges weren't the focal points for hand pressure.

Rather than devise an intricate locking mechanism for the tools, Schrade merely cut a hole in the back spring and put a small cleat a the base of the blades, allowing them to lock into place when opened. To release the blade, simply extend another locking tool to cause the back spring to flex enough to release the first blade. This is simple and effective.
Since the handles had been turned sideways, there was now more room for additional tools in the handles, and Schrade packed a respectable 5 tools on each side- Leatherman's Flagship model at the time, the PST II only had 4 on each side. The ST1 includes two flathead screwdrivers (one with wire stripper), a can opener, file, wood saw, ruler, partially serrated clip point blade, sheepsfoot blade, phillips screwdriver and an orange peeler. 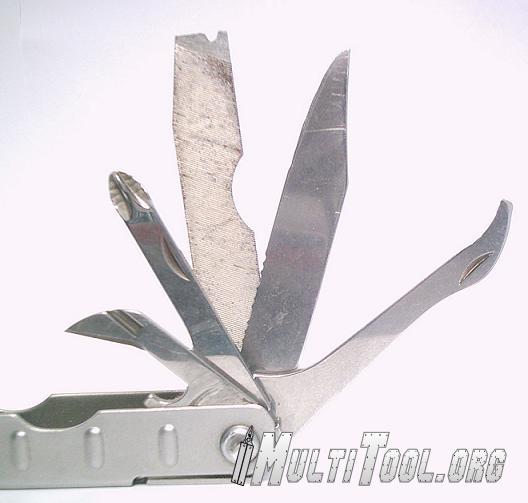 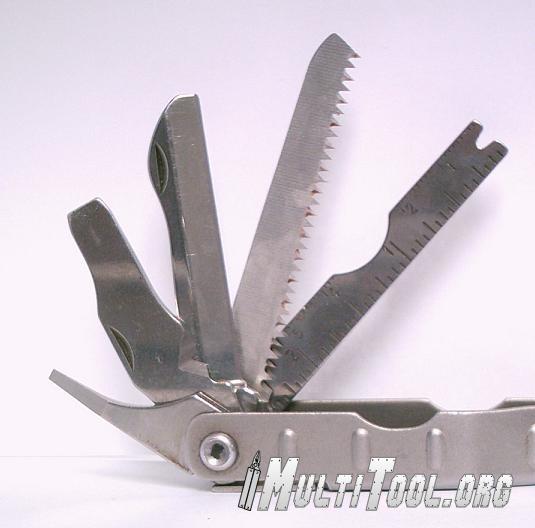 The ST1 has a great tool selection, although they do seem somewhat stubby

The ST1 is also a much larger tool than most, and when the pliers head is extended, it is one of the tallest folding multitools available- I have only encountered one that is bigger, but it is quite rare- the Victorinox Autotool.

Aside from the benefits of it's large size, the ST1 is actually quite bulky as well. It's sideways handles make for a very broad tool- it's the widest tool i have seen when closed, potentially making it awkward to carry. Also, due to the shape of the handles, the tools contained within are a little stubby by comparison. As if that wasn't bad enough, the shape of the handles also cause your hands to either be uncomfortable or to slide towards the pliers head. This is still a step up from having the sheet metal edges cut into your hands, but not a big step up.

The large, odd shaped handles and the cutouts that lock the tools open

The locking mechanism is also not without it's faults- only two tools lock open, and the mechanism takes some getting used to for a release. Several times now I have accidentally locked both locking tools open at the same time while trying to release one. Once both tools are open, the only way to unlock them is to find something (like another multitool!) to lever the back spring enough to release one or both tools. This can be very inconvenient and flies in the face of the convenience that multitools were created for.
All in all, he ST1 is a decent tool, although not suitable for the small-handed folks like myself. It was a series of imaginative solutions to a number of common multitool problems at the time, and for the collector, was an important step in the evolution of the multitool. Adding to it's collectable value is that Schrade closed it's doors in 2004, later to be re-opened by Taylor Cutlery. For the tool user I would suggest a newer tool than this one as the newer designs far outclass any tools from this era.

More in this category: « Meyerco Paradox Review Paul Chen Multi Tasker Review »
back to top
Interested in this or a different tool and still have more questions?
Why not join us over on the Multitool.org Forum where our community can help you find what you're looking for!