Since the dawn of the knife man has had to sharpen his knife from time to time as the need arises, sharpening is a skilled labor, you have to learn how to use a stone to hone your edge or take the cheating route and use any one of the numerous gimmicks that they have for sharpening. Well Columbia River has a production knife that sharpens itself, I had to see it to believe but it’s true. And best of all, this puppy’s affordable. 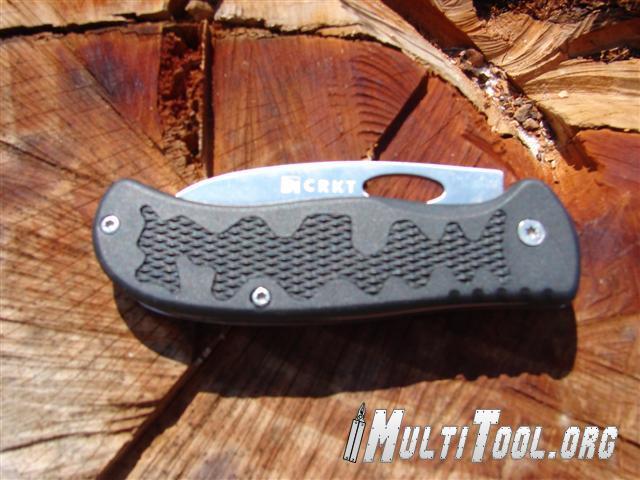 Maj. Howard Pope (USAR Ret.) worked in collaboration with Steve Jernigan who is a custom knifemaker and Knifemakers’ Guild member, to create the worlds first self sharpening pocket knife. What makes this baby tick is the 400-grit diamond-coated spring sharpener built into the folder frame, when you look inside the handle you see a thin strip of diamond coated steel held to the frame of the knife by four metal tabs. Every time the knife is either opened or closed the knife’s blade runs along the diamond surface creating a burr on the other side. The blade style on this knife is sheepsfoot and due to the nature of the sharpening device it’s comes only with a chisel grind. CRKT even had to go with a steel soft enough that would easily be sharpening by the internal stone, they chose 420 stainless due to it’s soft properties, it may not be great at holding an edge but when you sharpening your knife virtually all the time, it really doesn’t matter.

Using this knife now for probably a month now and I have noticed some drawbacks to the sharpening method and the blade grind/style. First off, I love wharncliffs and sheepsfoot blade style, nothing is better suited to utility and dirty work that a blade that is straight and gives you a nice point for piercing and cutting. The blade however is very robust, good in which it is very strong and can withstand a lot of abuse, but sometimes so thick that I think the size of the blade has a problem with the angle of the edge and it’s so steep that it looses its edge rather quickly. A more shallow angle and thinner stock for the blade may help in edge retention and ease in which is slices but I doubt the knife would be able to undergo the abuse it takes already.

The knife comes with no locking mechanism, due to the internal sharpening device there was no room to put a lock, instead CRKT has a very robust spring to hold the knife opened and closed. At first you think, man this knife opens up hard! But with some use you get use to it, and with it being non-locking it gives people all over the world to try it. (Darn knife laws) The Handle of the knife is plastic with rubber inserts, good hand purchase and control with this knife, it doesn’t take long at all to get use to and comfortable with knife. Classic design mixed with ingenious technology, it’s great that so many custom knife makers get to work with knife companies to allow lower priced models that most of us would never be able to handle otherwise. 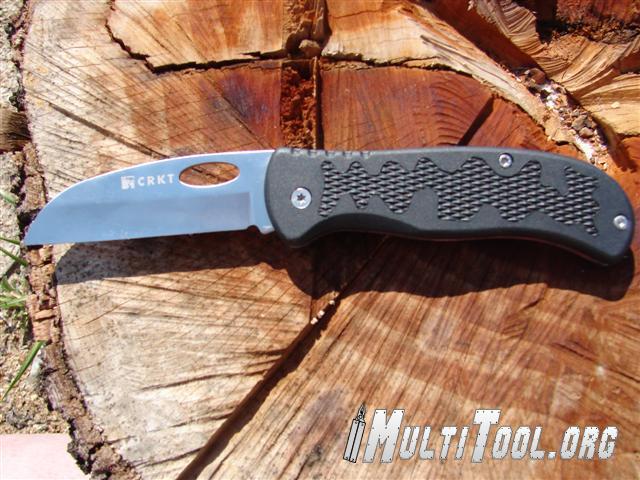 I have used this knife to do everything from cutting plastic straps, rope, and a mountain of cardboard and I must say that I am surprised how much this knife takes. Yes the edge does dull quicker than most knives, and after long cutting sessions I have to repeatedly open and close the blade 10+ times to give the blade a decent edge again. Overall the self sharpening aspect is a novel idea, maybe even giving it a wow factor but being the first of its kind it’s far from perfect. Because of the burr which is created on one side it creates a rough jagged edge which they claim “aids” in the cutting but I am so use to having a smooth edge I have to strop it on cardboard or use a ceramic rod to smooth the edge.

I am an old fashion kind of guy and so use to doing things the old way that using the edgie has been an interesting experience for me, it’s got some good and bad points that I am sure CRKT may even work out if they make a second model. If not I give credit where credit it due, they pulled off not only making a knife that sharpens itself but is affordable as well. The CRKT Edgie can be had for $30, not a bad steal for a knife you can really abuse. It’s a good present to friends of yours that aren’t knife savvy and don’t know how to sharpen one. Hats off to the folks at CRKT.

More in this category: « SureFire Delta EW-04 Kershaw Twocan »
back to top
Interested in this or a different tool and still have more questions?
Why not join us over on the Multitool.org Forum where our community can help you find what you're looking for!